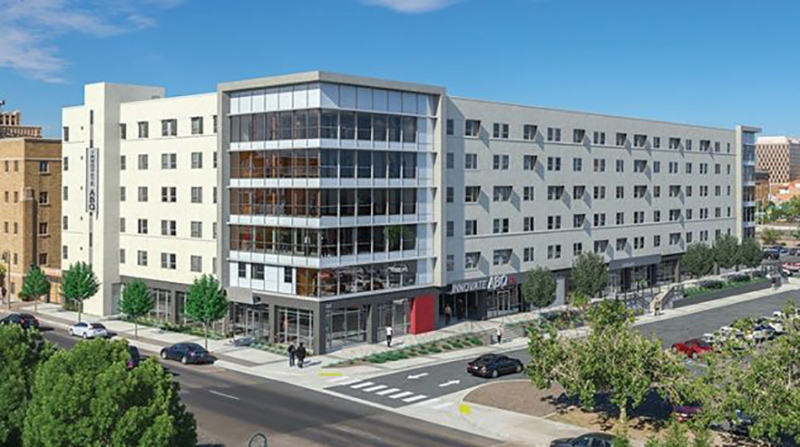 The six-story Lobo Rainforest Building, the first new construction on the Innovate ABQ site Downtown and the tallest building to rise here in some time, has already modernized Albuquerque’s skyline. Come its grand opening August 25 (see details below), the ensuing activity on the seven acres at Broadway and Central will begin generating pedestrian traffic, economic enterprise, and research and education unlike any before in the city’s center.

Underway since this time last year, the Lobo Rainforest’s opening has been eagerly awaited by a fast-growing entrepreneurial community that has developed impressive cohesion despite the lack of a permanent geographic anchor. The building has been intended to serve that function since the project was merely a concept on paper years ago.

“The Lobo Rainforest Building will activate the site,” said Lisa Kuuttila, STC.UNM’s CEO and chief economic development officer. “It’s a space where it will be easy for the tenants and the students (from UNM’s Innovation Academy) and others to collaborate, which is always the goal of the entire Innovate ABQ project. This starts it off.”

Floors two through six will be composed of 155 residences capable of housing 310 students. The ground floor will hold offices for tenants including startups, STC.UNM, the Air Force Research Laboratory, a café, Innovation Academy, Nusenda Credit Union and other companies to be announced soon.

The location of the Rainforest Building on Central will allow students living there to hop on Albuquerque Rapid Transit to travel to and from UNM’s main campus.

“The design of the Lobo Rainforest building is one that has a lot of open space and a lot of glass,” Kuuttila said, “so there’s a lot of visibility when you’re inside. It is really designed to encourage not just collaboration but also to have a visual impact and views in any direction.”

A courtyard is being installed between the Rainforest Building and the former church to serve as an outdoor gathering space for tenants and the general public; Nusenda will have kiosks on site for easy banking; and the building will be used frequently for events, beginning the day it opens.

The New Ventures Café, a monthly mentoring and networking event for entrepreneurs, will be held in the new space beginning at 10 a.m., right after opening remarks of the morning’s ceremony.

Seminars, pitch competitions, student internship fairs and more will also be held in the building.

Also coming in August is Central New Mexico Community College’s new 13,000-square-foot FUSE Makerspace powered by CNM Ingenuity Inc., which is planning to open just across the parking lot from the Rainforest Building on Aug. 28. FUSE will move from its current 3,000 square feet on the main CNM campus into the building formerly occupied by the Epicenter. A formal ribbon cutting is being planned for the fall.

“FUSE Makerspace and CNM Ingenuity Inc. are excited to be part of Innovate ABQ and the impact the campus will have on the economic development of not only Albuquerque but the state of New Mexico. Through makerspace, participants can realize their dreams of business ownership, innovation and design, and economic stability,” said Dawnn Moore, senior program manager at CNM Ingenuity Inc.

Construction on Phase 1-B of Innovate ABQ, which will involve renovation and repurposing of the adjacent church, is expected to start by the end of 2017, with an estimated opening of fall 2018, said Innovate ABQ’s project manager Danny Dietz. Plans for the interior include start-up lab and office spaces; office spaces for start-up support groups, such as incubators and service providers; an upscale food hall; and a large community center for the entrepreneurial ecosystem.

While plans are still subject to change, the design work is beginning, and non-binding letters of intent have been issued for about 85 percent of the Phase 1-B space, Dietz said.

The corner building on the site will act as a home-base for entrepreneurial activity in Albuquerque. “It will add to the overall site vibrancy and expand the footprint of the ecosystem,” he said.

WHEN: 9 a.m.-noon Aug. 25, with opening remarks by elected officials beginning at 9 a.m.

WHERE: Broadway and Central