The Innovate ABQ project is a multi-partner effort to stimulate New Mexico’s economy and transform it into an innovation economy. Perkins+Will, a development firm with expertise in Innovation Districts, first created a Development Framework in 2013 with input from the community and stakeholders. Their original plan, although still valid, could not foresee the changes in our economy and region over the past eight years. Thus, they re-vamped the master plan and unveiled it during a UNM Rainforest Forum on July 15.

Plans for the new development, that could take shape as early as next year, include up to five new buildings. With flexibility and adaptability in mind, the updated plan encompasses an area of approximately seven-acres and addresses COVID-19 related impacts, including accommodating more outdoor spaces, work areas, and amenities, remodel for a bioscience lab and related parking needs.

A new partnership has also formed between the University of New Mexico and HatchSpaces, LLC to develop the bioscience lab project. The company has a track record of creating state-of-the-art lab facilities for science communities in California with a “build it and they will stay” mentality. They work to help regions retain early-stage science and biotechnology startups emerging from research environments.

The University of New Mexico is finalizing a deal with California-based developer HatchSpaces LLC to take over the project as part of the Innovate ABQ high-tech research and development zone at Broadway and Central, executives from HatchSpaces told local community leaders in an online forum Thursday afternoon.

“We’re close to being able to formally announce the kick off of the project,” HatchSpaces principal Howard Kozloff told forum participants. “There’s just some ‘i’s’ still to dot and ‘t’s’ to cross.”

UNM, which acquired the church’s 7-acre Downtown property in 2014 to turn it into an innovative entrepreneurial hub in the heart of Albuquerque, has for years targeted conversion of the former parochial school as the next phase of development for the Innovate ABQ site, following the 2017 opening of UNM’s six-story Lobo Rainforest Building. But until last summer, site development was managed by a nonprofit entity that faced financial challenges and legal issues in building out the Innovate ABQ hub, encouraging UNM to re-take control of the project.

“That company has a great track record in California for this type of life-science-focused real estate development,” Ward told the Journal. “We were prepared to go it alone on the project, but then HatchSpaces came to us.”

The company specializes in building research and development facilities for bioscience companies, making the Innovate ABQ project a good fit, Kozloff said. It plans to convert the 26,000-square-foot structure, which sits on the west side of the First Baptist Church Sanctuary and office tower, into wet labs and office space for startup companies looking to launch and grow in Albuquerque.

The company hopes to break ground on the renovation in early 2022, after finalizing its partnership with UNM and acquiring regulatory approvals, Kozloff said.

“We have some diligence left to fully assess the condition of the building, but we envision about nine months of construction time,” he said.

The renovation investment will be shared between UNM and HatchSpaces.

“We don’t know the total yet,” Ward said. “We expect to finalize the partnership deal in the next four weeks or so, and then HatchSpaces will do some design work and determine the costs.”

UNM will unveil an updated master plan this afternoon to reinvigorate the build-out of the 7-acre site at the corner of Central and Broadway. The new plan calls for a more flexible approach to developing the Old First Baptist Church property that UNM acquired in 2014, allowing it to be built in more manageable, bite-size spurts, said Lisa Kuuttila, president and CEO of Rainforest Innovations, which manages the university’s entrepreneurship and technology-transfer programs.

That could help renew investor interest and funding for the site, which UNM, public officials and private sector partners have worked on since 2015 to turn into a bustling Innovation District in the heart of Albuquerque where new, high-tech businesses can access needed resources to launch and grow.

UNM asked Perkins & Will, the design firm that created the original master plan in 2015, to “refresh” its design strategy based on changes in the local business and economic development landscape since the first plan came out, Kuuttila said.

“We expect the new strategy will help us navigate those changes and take advantage of new opportunities,” Kuuttila told the Journal. “We expect quite a bit of development to occur over the next five years.”

Perkins & Will executives discussed the updated plan with the Journal in advance of this afternoon’s online presentation to community leaders. Overall, the new design aims to make Innovate ABQ an integral part of Downtown revitalization efforts, rather than develop the 7-acre site as just a neighboring entity among the expanding businesses and public infrastructure under development in the area, said Stephen Coulston, the Perkins & Will principal leading the project.

One major change, for example, would convert the west side of the Innovate ABQ property – which abuts Downtown’s north-south railroad tracks – into a welcoming gateway into the research and development zone. That area could become a central hub, or public gathering place, for people to meet or hang out, possibly with coffee shops, restaurants, and maybe a brewery and small park located there, said Perkins & Will Principal David Green.

“It would become a new front door to the innovation district,” Green told the Journal. “That’s where everyone working at Innovate ABQ or surrounding businesses would sit down at 5 p.m., drink a beer and watch people walking by or biking through the area.”

A welcoming entrance there would organically connect Innovate ABQ to the city’s new “rail trail” project, which aims to turn the north-south rail line into a lively public pathway that runs from Lomas in the north to the rail yards in the south.

The city envisions new parks, businesses, multi-family housing and more lining up along the trail to create a connecting thread that unites Downtown’s northern and southern sides, plus the east and west sides as well, which are currently separated by the railroad tracks, said Karen Iverson, manager for the city’s Metropolitan Redevelopment Agency.

“The tracks are a big barrier Downtown that bifurcates the east and west,” Iverson told the Journal.

“We want it to become a multi-modal path that connects Downtown locations. We want to make it all accessible for people to freely and safely cross the tracks and move throughout the area.”

That includes a city plan for a sky bridge to connect the convention center’s parking structure to a new plaza to be built east of the railroad tracks.

The rail trail development could open more space for startup businesses and other Innovate ABQ entities to locate in areas north of Innovate ABQ, said Coulston of Perkins & Will.

“There’s prime open space there that, as it’s developed, can catalyze activity in and around Innovate ABQ,” Coulston told the Journal. “Properties to the north can accommodate development in close proximity.”

Strategies for direct construction at Innovate ABQ will also change under the updated master plan. For one thing, an original design concept to extend existing streets and build new ones in crisis-crossing fashion throughout the site has been scratched. That original design aimed to make the entire site accessible with vehicles from all directions – including Central on the south, Broadway on the east and Tijeras on the north – while dividing the Innovate ABQ property into blocks to allow construction to progress in quadrants.

But changes in and around the property now interfere with those plans. For instance, the six-story Lobo Rainforest Building, which UNM opened in 2017, now occupies some area originally designated for street extension.

The new plan calls for more flexible, agile development, with four- to five-story multi-tenant buildings constructed as project initiatives, investor interest and funding emerges. The buildings themselves would be scaled to need, with perhaps 5,000-square-foot spaces created for different tenants rather than a huge, 100,000-square-foot facility for one agency or institution.

“The (new) plan is designed to be flexible and adaptable for incremental implementation,” said Perkins & Will Project Manager Paul Ward. “The Albuquerque innovation market is different from other cities. Occupants tend to seek smaller, multi-tenant buildings, so we envision many pieces fitting together and developed flexibly over time.”

As new facilities are constructed, the ground floors will always incorporate gathering and networking spaces inside and out to promote the networking and community sharing opportunities that lead to creative innovation, Coulston said.

Perkins & Will didn’t discuss plans for the old church sanctuary, office tower and parochial school that still sits on the southeast corner of Innovate ABQ at Broadway and Central. UNM wants to turn part of that 71,000-square-foot structure into a bioscience center with offices and wet labs for startup companies.

Still, development plans will be reviewed at this afternoon’s forum, Kuuttila said.

UNM’s decision last year to re-take control over its Downtown property from Innovate ABQ – a nonprofit 501(c)3 that UNM set up in 2015 to independently manage the site – encouraged the university to update its master plan, said Teresa Costantinidis, UNM’s senior vice president for finance and administration. The nonprofit had faced financial difficulties and legal issues in developing the property.

“It seemed like an appropriate time to rethink our strategies following the land’s return to UNM governance,” Constantinidis said. “We’ve had real engagement with community stakeholders with lots of meetings and feedback. We’re very pleased with the results.”

END_OF_DOCUMENT_TOKEN_TO_BE_REPLACED 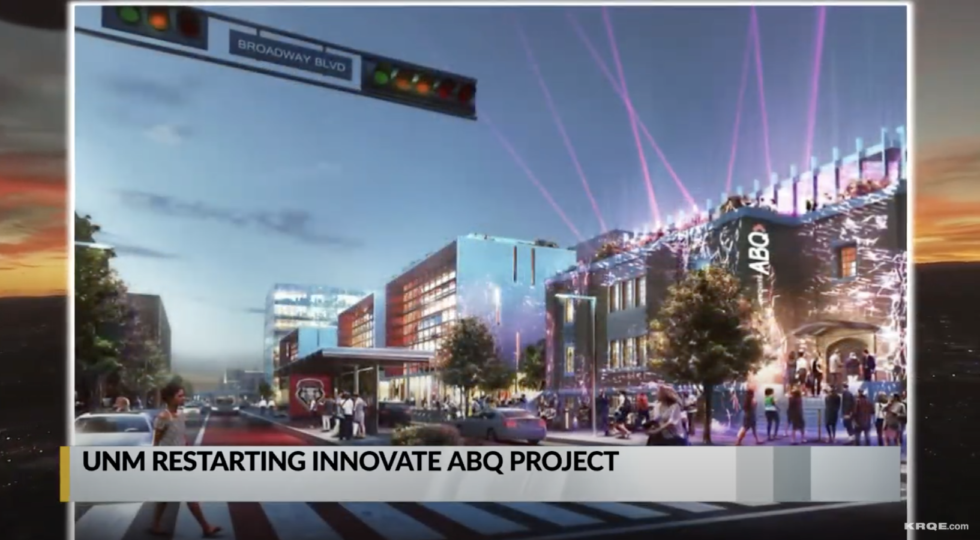